Take a Moment to Make Memories

the Lakes in Spring, Summer, Fall or Winter

Nature’s beauty in the Finger Lakes – the Land of Sunrises, Sunsets, Waterfalls and Rainbows 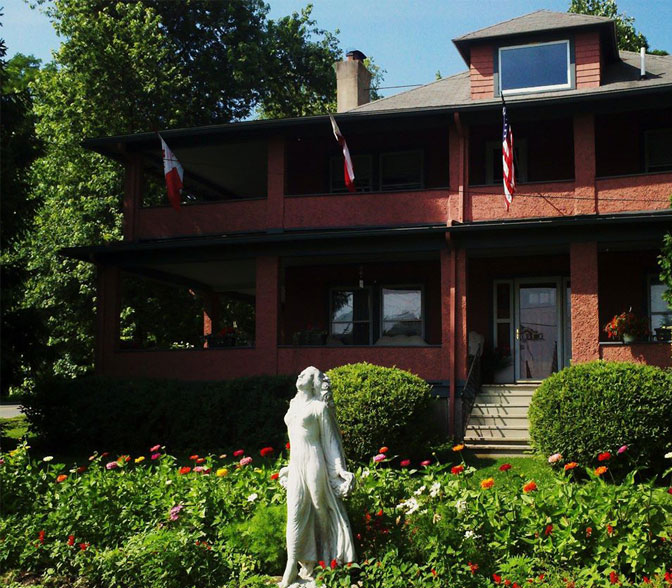 Located in the “Heart of the Finger Lakes Wine Country” with a veranda view of Seneca Lake!

The Starkey House was built in 1922 by businessman and postmaster, Charles Raymond Brewer for his wife and children. It is located on the historic, once bustling “Starkey Corners” and named after the township’s original founder, the prominent merchant John Starkey.

1922 Starkey House Bed & Breakfast Inn has received a Five Star quality rating on multiple social media websites, including Facebook and Google. This rating is based upon hundreds of reviews from guests from its establishment in 2011. Our guests and visitors have raved about the comfort, attention to detail, food, hospitality and overall travel experience.

The Starkey House features Mission style architecture, congruent with the Arts & Crafts period, including authentic light-capturing stained glass, polished American chestnut woodwork, and original light fixtures. There was never a doubt that its original appointments, such as interior French doors, front and rear staircases, fireplace and three-story spaciousness would lend themselves beautifully to becoming the perfect bed & breakfast.

All rooms are clean, comfortable and have ensuite baths. Breakfast is included but optional each morning when you book directly. For a shortcut to book, visit the reservation CALENDAR.

The Veranda View… a sweet getaway with a private porch to enjoy Seneca Lake views. The largest room in the house.

The sweet, romantic Catalpa Room is tucked quietly in the northeast corner of the 2nd floor and provides beautiful sunrises over Seneca Lake.

The Sycamore Lakeview Suite/Lounge is a sweet, relaxing, cozy room featuring a walk-up lounge with gorgeous views of Seneca Lake.

The Private Entry Suite is a new with a private entry, open concept space. Features a bedroom, den with extra sleep space, and kitchenette. Ideal for three night to week-long stays.

“I am passionate about life in the Finger Lakes! I’ve traveled to many beautiful places in the world and always seem to feel that I am living in God’s country when I awake each morning to see Seneca Lake and a breathtaking sunrise from my window!”

Breakfast is served each morning in the dining room or al fresco on the outside porches, depending on the season.

Food Platters are available to order for special occasions such as anniversary, birthday, or just to enjoy when you arrive, for an extra charge.

1922 Starkey House Bed & Breakfast is located centrally within the most exciting hub of the Finger Lakes Region of upstate New York amidst sunrises, sunsets and rainbows! You’ll be glad you picked this beautiful spot to stay, with everything fun to do, no more than thirty minutes to just a few minutes away!
View More

“Cathy is a gracious and accommodating hostess. She supports the local economy by making delicious breakfasts with ingredients from local businesses. Her breadth of knowledge on the history of the area is deep and interesting. This was our first stay at 1922 Starkey House. It will certainly not be our last. If you are looking for quaint, peaceful getaway located in the Wine Country, this place is second to none. Highly recommended!”

BOOK DIRECT FOR THE BEST PRICING

WITH NO ADDED RESERVATION FEES BREAKFAST IS INCLUDED